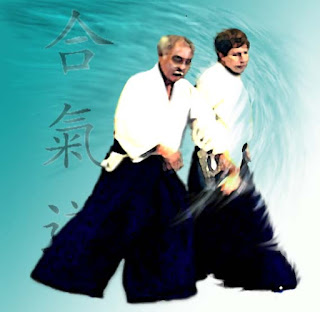 Many techniques in the Capital Aikikai style involve a body movement which emulates the movement of haso kamai in jodo.

Email ThisBlogThis!Share to TwitterShare to FacebookShare to Pinterest
This video is a lesson on jo kata.
Aikidoists are not practicing jodo, nor are they emulating combat situations.  They use the jo (short staff) and boken (sword) to better learn hand techniques.

A while back I remember watching a video in which Moriteru Ueshiba was showing how to do some basic techniques. I thought it odd when he showed iriminage that his arm went out to his side as much as it did. The reason I thought it odd was because when I watched him do iriminage earlier, his throwing arm stayed in front of him, in his center. I guess there's a difference between how to show a technique and how to do it fluidly. As I watched this video, again I noticed how his hands stayed in front of him. The ease with which he moves inspires me.

I originally came across this video at Aikicosmos. It was posted on the G+ Aikido community. The man who posted it on YouTube, Guillaume Erard, composed the beautiful music.

Posted by irreverance at 8:37 PM No comments:

Email ThisBlogThis!Share to TwitterShare to FacebookShare to Pinterest
Labels: video

Sometimes I come across something that seems so vital I know I just have to learn "that." When I saw this video by Yoshi Shibata Sensei, the first half drew me right into that experience. Shibata picked this up outside of his Aikido, but shows how valuable this it is for our practice. Rotating through uke's center happens all the time. I guess some people make it look easy.

Posted by irreverance at 4:08 PM No comments:

Thanks to Andrew for finding this. I believe O'Sensei (Morihei Ueshiba) is doing Aiki-Jujitsu rather than Aikido. Well worth the watch.

Posted by irreverance at 5:26 PM No comments: